Stories For Halloween- The Snowman on the Ivy

I hear a snowman climbing up the ivy that adorns the outside brick walls of this ancient house. How do I know it’s a snowman? By that swish of solidified snow against leaves that I would know anywhere, and  that drip of water loosened from his arm and from the tips of the ivy leaves.

I know he wants to turn those walls that are covered in greenery back to winter. He wants to climb in through an open window and freeze me, until my blood becomes white instead of red.

Snowmen have no ears, but this one has earmuffs, all brown and fluffed-out like headphones clamped against his head. Most snowmen carry nothing, or only a broom to sweep away the snow from the doorstep; but this one has a garden rake. He has tucked it under one thick, white arm while he climbs.

I know from much experience in which room the window has been left open, and exactly how much time I have to get away. Where shall I go to escape from him this time? This isn’t a recurring dream: it all happens in the real world.  I really do live in a Gothic tower of a house all covered in ivy, and it really is situated amongst snow-encrusted lawns, banked up like white peppermint cream in the perpetual winter of the village suburbs.

Here comes the snowman now, reaching the top of the wall, with his sharp hair slide rake and his earmuffs that stick out on each side, and all the red greasepaint that forms his lips with a real mouth in between them.

Usually I escape to the backyard behind the house, that alleyway where all the evil forces gather. Once again today I run the gauntlet through that yard, brushed against by wraiths on either side that are far more horrendous than my abominable snowman. The fences that border the yard are high, spiked white-painted wood, ghostly in the gloom.

As I pass through the yard it seems never-ending, yet at last it does end, right under the fruit trees. This orchard once belonged to a manor house, but now belongs to no-one, and all who live around here pick the fruits and take them home.

Here at the foot of the spreading trunks it is Spring, and  I expect the snowman to melt. Yet he never melts. All that happens is that I manage to get away, running and weaving in and out of the fruit trees until he loses me. As I run, I hear the voice of the Devil crying, “now you have  disappointed your audience. They were looking forward to a final scene in which the snowman rakes you to pieces.” 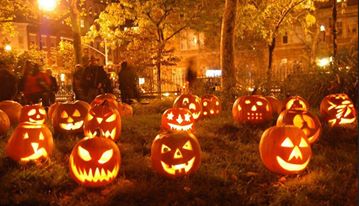